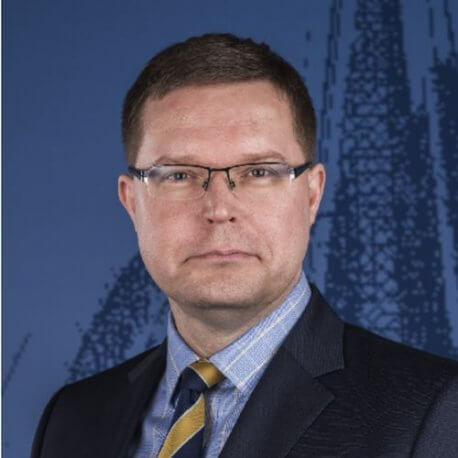 Christian-Marc Lifländer serves as the senior cyber policy official of NATO’s International Staff. As head of the Cyber Defence Section, he is responsible for leading the development and implementation of cyber defence policy across NATO.
Before joining NATO, Mr. Lifländer held executive and senior
advisory level positions within the Estonian Ministry of Defence, including Acting Deputy Undersecretary for Defence Policy, Director of Policy Planning, and Adviser to the Minister of Defence. Mr. Lifländer also served as a Defence Counselor at the Embassy of the Republic of Estonia in the United States and as a Defence Counselor at the Delegation of the Republic of Estonia to NATO.
Mr. Lifländer received a direct commission in the Estonian Defense Forces (Infantry) and has been awarded the Estonian Defence Forces Distinguished Service Decoration as well as Distinguished Service Decorations of the Estonian Ministry of Defence.
Mr. Lifländer received his Bachelor of Science Degree in Engineering from the United States Military Academy, West Point. He received his Master of Arts in Security Studies from Georgetown University’s Center for Security Studies (CSS) in the Edmund A. Walsh School of Foreign Service.