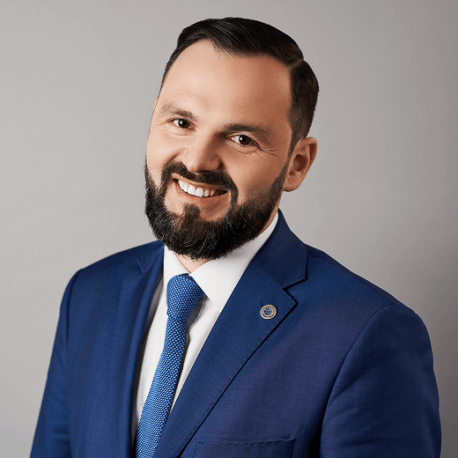 Since 2002 United Nations employee in UNDP (more information about UNDP’s role and activities under the UN System at www.undp.org). Since 2004, he has been developing programs and recommendations in the United Nations Global Compact as a Representative and General Director of UN Global Compact Network Poland (more about United Nations Global Compact activities and mandate at www.unglobalcompact.org and on the website dedicated to Poland www.globalcompact.org.pl ). United Nations Global Compact coordinates the UN system’s cooperation with the private sector within the UN Business Action Hub and through the Global Compact programs are created involving government, local government, business and expert centers.
Between 2002 and 2009, UNDP was responsible for international and multilateral cooperation and for the development of programs in Europe and Asia. Under UNDP, he has worked in dozens of countries, including UNDP headquarters in New York, implementing development programs. From 2004 to 2008 member of UNDP Management team in Poland. From 2009 to 2014 Director of the United Nations Development Program (UNDP) Office in Poland. From 2009 to 2012 he was responsible for the transfer of knowledge in the area of free economic zones, economic law and financial supervision systems to the Middle East, focusing on cooperation between Poland and Iraq under the UNDP PSDPI Program, in cooperation with UNIDO, the ILO and the World Bank. In 2012, he and his team received the Innovation in Action Award from UNDP for the most effective offices in implementing innovative programs. Under the function of the Director of the Office, UNDP Poland was responsible for coordination meetings of the UN System in Poland. Currently he is the Representative and General Director of Global Compact in Poland (UN Global Compact Network Poland).
He was a lecturer at the Central European University in Budapest, Columbia University in New York, Lviv University, Koźminski University (Akademia Leona Koźmińskiego), Ignacy Paderewski Institute of Diplomacy at the Ministry of Foreign Affairs, Warsaw School of Economics as well as at the University of Warsaw.
UN and EU policy expert, in particular in the field of business and administration cooperation as well as mobilization of the private sector to implement the UN development goals and standards. Specialist in development, multilateral and knowledge transfer. As a United Nations employee since 2002, he has been involved in economic diplomacy, social innovation, technological innovation, social economy, and development research and measurement, in particular through the use of the Human Development Index (HDI) and UN statistics.
Lawyer specializing in international law. A graduate of the prestigious UNDP Development Academy. Together with the team that he led, honored by a prestigious medal of the Parliament of the Republic of Poland for the efforts made in favor of people with disabilities, and development of the Polish Social Economy model.
Between 2009 and 2012 a member of the Strategic Advisory Board of the Prime Minister in Poland. On behalf of the Team of Advisors to the Prime Minister, inter alia, a co-author of the Long-term National Development Strategy until 2030 and the coordinator of the Human Capital Development Strategy until 2020. Since 2014, a member of the Expert Council of the National Center for Research and Development for the Economic and Social Innovation matters. Since 2015 he has been a member of the Innovation Team with the Deputy Prime Minister and the Minister for Development.
He is a media commentator on socio-economic and international affairs.